Do we need religion to know how to be good?

Why might humans need religious belief? Is it because we need religion to be ‘good’? Or is there some other way that makes humans behave well without a belief in god?

Some people argue that we need religion to be moral – to give us a sense of right and wrong, and help us be ‘good’. It sets a standard for good behaviour and punishes the bad. Others would say that it is perfectly possible to be moral and happy without believing in God or gods.

What do we mean by good?

Dr Oliver Scott Curry, a Cognitive and Evolutionary Anthropologist at the University of Oxford, explains that there’s quite a long list of things that make up what we call ‘good’.

Do we need religion to behave well?

Human behaviour, both good and bad, is a product of nature and nurture.

“Millions of years evolution have equipped us with a range of social, cooperative and altruistic dispositions.,” says Dr Curry. “We’re hard-wired in our brains to be good to each other. We’re not angels but we’re not devils either.”

“How we behave is also influenced by our environments – how we’re brought up, the people around us and what kind of culture we live in. For example, people compete for status in lots of different ways in different cultures. In some societies, people compete to eat the most hallucinogenic herbs, catch the biggest fish, kill the most enemies, write the best poem…in others, people compete by being the most generous, most brave, or most helpful.”

What is the connection between religion and morality?

There isn’t any necessary connection between religion and morality. “Morality is a lot older than religion. We’ve been moral beings for many years before we were religious. And, arguably, some religions aren’t moral at all. So, for example, some cultures have a belief in mischievous or even bad spirits. And humans have to make sacrifices and worship these bad spirits in the hope that they don’t do negative things to them e.g. ruin their crops or strike them down with a horrible illness.

“We’re used to the idea of powerful gods in the sky looking out for us and telling us to be good. That’s the basis of Christianity, Islam and Judaism. But these are relatively recent religions in terms of the history of human development. And even today not all religions follow the standard model of one kindly god looking out for us. Buddhism, for example, does not follow that model. Humans may have always had some supernatural belief but it hasn’t always been, and doesn’t have to be, moral.”

There’s a universal common moral code that nearly all societies tap into irrespective of religion or where they are in the world (Curry, O.S., Mullins, D.A. & Whitehouse, H., 2018).

“We recently conducted a large study of morals of 60 cultures around the world. We found that cooperation was key – and that cooperative behaviours formed the basis of seven universal moral rules. These are: help your family, help your group, return favours, be brave, respect authority, be fair and respect other people’s property”.

“In some cultures, morality is wrapped up in a supernatural, mystical cloud. But this isn’t necessary for these moral rules to apply. Instead, myths and superstitions grow up around the moral code. They then become entwined with each other which is how we end up thinking religion equals morality. It may well do but we shouldn’t assume that it has to be that way” adds Dr Curry.

It’s a common assumption that a country which is very religious will also be more law-abiding, moral and respectful than one which is not. But this is not the case.

According to the non-profit organization, Vision of Humanity, which publishes an annual Global Peace Index, the ten safest and most peaceful nations in the world are the least God-believing. While the least safe and peaceful nations are the most religious. This doesn’t mean that a lack of religious belief causes improved wellbeing or religious belief causes social problems.  But it might mean social problems – a lack of basic necessities, and institutions like the rule of law – people might turn to religion out of desperation, explains Dr Curry. And once their situation improves, they may no longer put their faith in religion. “For example, once medicine came along and hospitals were built, people were much less likely to believe in magical potions and healing spells.”

“What’s clear from the research is that secular, non-religious countries, like the UK, are not negatively affected by the absence of faith,” says Dr Curry.

Do humans need faith to make sense of their lives?

So we’ve read that religion doesn’t necessarily make a country or culture moral or good. But what else could religion mean for humans? Does it offer a way to make sense of our lives?

“One of the things people get most meaning from is taking part in something collective, i.e. working with other people to achieve something together. We are social animals so that’s not really surprising. Your social network is your life support system. If you asked a bee what gives its life meaning, it would likely say working together with other bees to achieve something for all of them. It’s the same for us. Commitment to a cause greater than ourselves gives our lives meaning and makes us feel good,” says Dr Curry.

We like being in groups and it can be but doesn’t have to be, religious. For example, you could enjoy being a football fan or following a band, political party, theatre group or environmental campaign. All of these have the same thing in common – they bring people together and make you feel part of something bigger than yourself. That gives a warm glow and sense of belonging. And we humans need to feel we belong. It’s a great comfort knowing others feel the same way. You can get that from religion. But you can also get it from a wide variety of other forms of association and other beliefs.

Are there any groups you belong to that are important to you? Why do you think religion means so much to some people and groups, and not to others?

To read a summary of Dr Curry’s research into morality across the world. 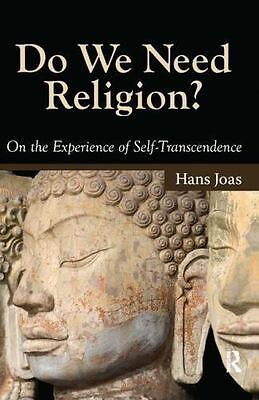 Do we need religion?

The old assumption that modernization leads to secularization is outdated. Yet the certainty that religion is an anthropological universal that can only be suppressed by governments is also dead. Thus it is now a favorable moment for a new perspective on religion. This book takes human experiences of self-transcendence as its point of departure. Religious faith is seen as an attempt to articulate and interpret such experiences. Faith then is neither useful nor a symptom of weakness or misery, but an opening up of ways of experience. This book develops this basic idea, contrasts it with the thinking of some leading religious thinkers of our time, and relates it to the current debates about human rights and universal human dignity.

“synopsis” may belong to another edition of this title.