The Gospel of Mary

(Pages 1 to 6 of the manuscript, containing Chapters 1 – 3, are lost. The extant text starts on page 7…) . . . Will matter then be destroyed or not? 22) The Savior said, All nature, all formations, all creatures exist in and with one another, and they will be resolved again into their own roots. 23) For the nature of matter is resolved into the roots of its own nature alone. 24) He who has ears to hear, let him hear. 25) Peter said to him, Since you have explained everything to us, tell us this also: What is the sin of the world? 26) The Savior said There is no sin, but it is you who make sin when you do the things that are like the nature of adultery, which is called sin. 27) That is why the Good came into your midst, to the essence of every nature in order to restore it to its root. 28) Then He continued and said, That is why you become sick and die, for you are deprived of the one who can heal you.
29) He who has a mind to understand, let him understand. 30) Matter gave birth to a passion that has no equal, which proceeded from something contrary to nature. Then there arises a disturbance in its whole body. 31) That is why I said to you, Be of good courage, and if you are discouraged be encouraged in the presence of the different forms of nature. 32) He who has ears to hear, let him hear. 33) When the Blessed One had said this, He greeted them all,saying, Peace be with you. Receive my peace unto yourselves. 34) Beware that no one lead you astray saying Lo here or lo there! For the Son of Man is within you. 35) Follow after Him! 36) Those who seek Him will find Him. 37) Go then and preach the gospel of the Kingdom. 38) Do not lay down any rules beyond what I appointed you, and do not give a law like the lawgiver lest you be constrained by it. 39) When He said this He departed.

The Truth about Jesus and Women

Chapter 5 1) But they were grieved. They wept greatly, saying, How shall we go to the Gentiles and preach the gospel of the Kingdom of the Son of Man? If they did not spare Him, how will they spare us? 2) Then Mary stood up, greeted them all, and said to her brethren, Do not weep and do not grieve nor be irresolute, for His grace will be entirely with you and will protect you. 3) But rather, let us praise His greatness, for He has prepared us and made us into Men. 4) When Mary said this, she turned their hearts to the Good, and they began to discuss the words of the Savior. 5) Peter said to Mary, Sister we know that the Savior loved you more than the rest of woman. 6) Tell us the words of the Savior which you remember which you know, but we do not, nor have we heard them. 7) Mary answered and said, What is hidden from you I will proclaim to you. 8) And she began to speak to them these words: I, she said, I saw the Lord in a vision and I said to Him, Lord I saw you today in a vision. He answered and said to me, 9) Blessed are you that you did not waver at the sight of Me. For where the mind is there is the treasure. 10) I said to Him, Lord, how does he who sees the vision see it, through the soul or through the spirit? 11) The Savior answered and said, He does not see through the soul nor through the spirit, but the mind that is between the two that is what sees the vision and it is […] (pages 11 – 14 are missing from the manuscript)

Chapter 8 . . . it. 10) And desire said, I did not see you descending, but now I see you ascending. Why do you lie since you belong to me? 11) The soul answered and said, I saw you. You did not see me nor recognize me. I served you as a garment and you did not know me. 12) When it said this, it (the soul) went away rejoicing greatly.
13) Again it came to the third power, which is called ignorance. 14) The power questioned the soul, saying, Where are you going? In wickedness are you bound. But you are bound; do not judge! 15) And the soul said, Why do you judge me, although I have not judged? 16) I was bound, though I have not bound. 17) I was not recognized. But I have recognized that the All is being dissolved, both the earthly things and the heavenly. 18) When the soul had overcome the third power, it went upwards and saw the fourth power, which took seven forms. 19) The first form is darkness, the second desire, the third ignorance, the fourth is the excitement of death, the fifth is the kingdom of the flesh, the sixth is the foolish wisdom of flesh, the seventh is the wrathful wisdom. These are the seven powers of wrath. 20) They asked the soul, Whence do you come slayer of men, or where are you going, conqueror of space? 21) The soul answered and said, What binds me has been slain, and what turns me about has been overcome, 22) and my desire has been ended, and ignorance has died. 23) In a aeon I was released from a world, and in a Type from a type, and from the fetter of oblivion which is transient. 24) From this time on will I attain to the rest of the time, of the season, of the aeon, in silence.

Chapter 9 1) When Mary had said this, she fell silent, since it was to this point that the Savior had spoken with her. 2) But Andrew answered and said to the brethren, Say what you wish to say about what she has said. I at least do not believe that the Savior said this. For certainly these teachings are strange ideas. 3) Peter answered and spoke concerning these same things. 4) He questioned them about the Savior: Did He really speak privately with a woman and not openly to us? Are we to turn about and all listen to her? Did He prefer her to us? 5) Then Mary wept and said to Peter, My brother Peter, what do you think? Do you think that I have thought this up myself in my heart, or that I am lying about the Savior? 6) Levi answered and said to Peter, Peter you have always been hot tempered. 7) Now I see you contending against the woman like the adversaries. 8) But if the Savior made her worthy, who are you indeed to reject her? Surely the Savior knows her very well. 9) That is why He loved her more than us. Rather let us be ashamed and put on the perfect Man, and separate as He commanded us and preach the gospel, not laying down any other rule or other law beyond what the Savior said. 10) And when they heard this they began to go forth to proclaim and to preach.

The Gospel According to Mary 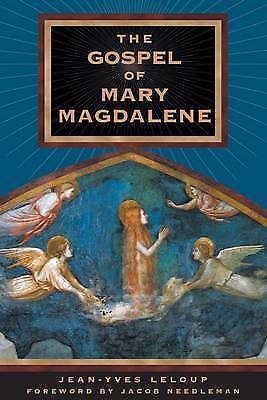 The Gospel of Mary Magdalene

The Truth about Jesus and Women

Tagged as: crist, Religion, the gospel of mary